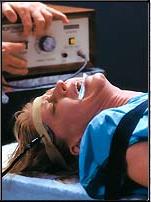 What used to be called electroshock or electric shock treatment (EST) is now usually called “electroconvulsive therapy”, often abbreviated ECT.  The term is misleading, because ECT is not a form of therapy, despite the claims of its supporters.  ECT causes brain damage, memory loss, and diminished intelligence.  An article in the March 25, 1993 New England Journal of Medicine says “ELECTROCONVULSIVE therapy is widely used to treat certain psychiatric disorders, particularly major depression” (p. 839).  The March 26, 1990 issue of Newsweek magazine reports that “electroconvulsive therapy (ECT) … is enjoying a resurgence.  …  an estimated 30,000 to 50,000 Americans now receive shock therapy each year” (p. 44).  Other recent estimates go as high as 100,000 per year.
In his textbook Psychiatry for Medical Students, published in 1984, Robert J. Waldinger, M.D., says “ECT’s mechanism of action is not known.  …  As with the other somatic therapies in psychiatry, we do not know the mechanism by which ECT exerts its therapeutic effects” (pp. 120 & 389).  Psychiatrists claim unhappiness or so-called depression is sometimes caused by unknown biological abnormalities in the brain.  They say by some unknown mode of action ECT cures these unknown biological abnormalities.  There is no good evidence for these claims.  Other than by causing mental disorientation and memory loss, ECT does not help eliminate the unhappy feeling called depression.  This is true even though currently unhappiness or “depression” is the only “condition” for which ECT is a recognized “therapy”.  Indeed, rather than eliminating depression, the memory loss and lost mental ability caused by ECT has caused some subjected to ECT so much anguish they have committed suicide after receiving the “treatment”.
ECT consists of electricity being passed through the brain with a force of from 70 to 400 volts and an amperage of from 200 milliamperes to 1.6 amperes (1600 milliamperes).  The electric shock is administered for as little as a fraction of a second to as long as several seconds.  The electrodes are placed on each side of the head at about the temples, or sometimes on the front and back of one side of the head so the electricity will pass through just the left or right side of the brain (which is called “unilateral” ECT).  Some psychiatrists falsely claim ECT consists of a very small amount of electricity being passed through the brain.  In fact, the 70 to 400 volts and 200 to 1600 milliamperes used in ECT is quite powerful.  The power applied in ECT is typically as great as that found in the wall sockets in your home.  It could kill the “patient” if the current were not limited to the head.  The electricity in ECT is so powerful it can burn the skin on the head where the electrodes are placed.  Because of this, psychiatrists use electrode jelly, also called conductive gel, to prevent skin burns from the electricity.  The electricity going through the brain causes seizures so powerful the so-called patients receiving this so-called therapy have broken their own bones during the seizures.  To prevent this, a muscle paralyzing drug is administered immediately before the so-called treatment.  Of course, the worst part of ECT is brain damage, not broken bones.